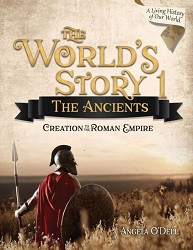 World's Story 1 guides students in a trip around the world as they study history from Creation to the Roman Empire.

In The World's Story 1, your student will:

See God's hand and redeeming love at work from the very beginning
Meet biblical patriarchs, judges, prophets, kings, and historical figures from Scripture (including Abraham, Joseph, David, and Esther), as well as other important characters from history like Hammurabi, Alexander the Great, and Julius Caesar
Study ancient civilizations spanning the whole globe, including the Sumerians, Egyptians, Babylonians, Chinese, Celts, Nubians, Nazca, Persians, Greeks, Romans
and so much more!