Science in the Scientific Revolution Set 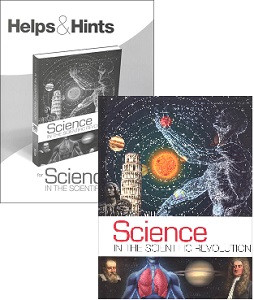 Science in the Scientific Revolution Set

Science in the Scientific Revolution is the third book in a hands-on, multilevel elementary science series that introduces scientific concepts using history as its guide. It covers the scientific works of natural philosophers from 1543 to the end of the 1600s.

Because the course covers science as it was developed, it discusses a wide range of topics including astronomy, human anatomy, medicine, botany, zoology, heliocentrism, geocentrism, gases, pressure, electricity, fossils, microbiology, binary numbers, gravity, conservation laws, and the laws of motion. Throughout the course, the student learns that most of the great natural philosophers who lived during this time were devout Christians who were studying the world around them to learn more about the nature of God.