Science in the Age of Reason 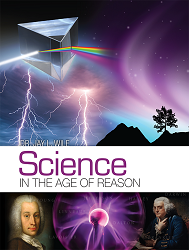 Science in the Age of Reason

Science in the Age of Reason is the fourth book in a hands-on, multilevel elementary science series that introduces scientific concepts using history as its guide. It covers the scientific works of natural philosophers from the early 1600s to the early 1800s. Because the course covers science as it was developed, it discusses a wide range of topics including astronomy, medicine, botany, zoology, chemistry, geology, human physiology, electricity, conservation laws, and weather. Students learn not only the science that was being discovered at the time, but also the beliefs of the natural philosophers who were discovering it. As a result, students can see how a person's worldview affects his or her scientific conclusions.

Because of its unique design, the course can be used by all elementary-age students. Each lesson contains an interesting hands-on activity that helps illustrate the scientific concept that is being discussed, and it concludes with three different levels of review exercises. Students do whatever review exercise matches their specific level of understanding.