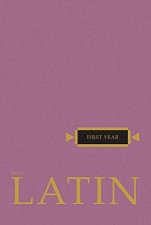 In the Henle Series, grammar and syntax are collected into a separate 250-page Grammar Manual, which is used as a handy reference to accompany all four years of Henle. The Henle texts contain all of the exercises and readings. In the First Year text, a limited vocabulary of 500 words allows students to master grammar without being overwhelmed with a large vocabulary. Many repetitious Latin phrases and copious exercises produce mastery rather than frustration, and the mixture of Christian and classical content is appealing to students. Exercises and readings teach Roman and American history, the difference between the pagan and Christian worldviews, and the difference between the virtues of the natural man (of whom the Roman was the greatest type) and the virtues of the Christian man, which are possible only through grace.

Henle is a Catholic text, but its superiority as a teaching resource and the outstanding benefits of its Christian perspective far outweigh the very occasional picture or reference that a Protestant might wish to ignore.