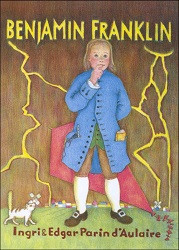 An intuitive understanding of the things children love to know, combined with the d'Aulaire's extraordinary artistic ability make this book on the life of one of America's most beloved founders a perennial classic. Folk art style illustrations are enhanced with pert aphorisms from Poor Richard's Almanac on each page. Readers will learn that Benjamin was the youngest of seventeen children "all counted" and that "it was a piece of luck that his kite experiment had not killed him." They will also come to know the inventor whose thirst for knowledge led him to constantly seek to improve the lives of his fellow men. Readers will follow his life as a leader in the American Revolution and ambassador to both Britain and France and learn why the French hailed him as the man who "tore the lightening from the sky and the scepter from tyrants."