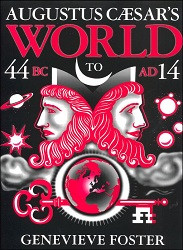 Considered the innovator of "horizontal history," Genevieve Foster became frustrated when her two school-aged children complained about the boring presentation of history in their school texts. This frustration led to Foster's first book, George Washington's World (1941). In her unique approach, Foster weaves a story of the world around her central character; rather than focusing exclusively on geo-political events, as most textbooks do; she includes stories of scientific discovery and invention, music, literature, art, and religion. She has a keen intuition for stories that will especially delight and amuse her youthful audience.