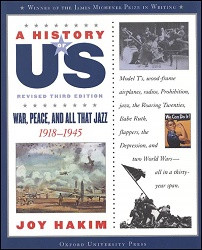 From woman's suffrage to Babe Ruth's home runs, from Louis Armstrong's jazz to Franklin Delano Roosevelt's four presidential terms, from the finale of one world war to the dramatic close of the second, War, Peace, And All That Jazz presents the story of some of the most exciting years in U.S. history. With the end of World War I, many Americans decide to live it up, go to silent flicks, drive cars, and cheer their favorite baseball teams. When Depression strikes the good times dampen--jobs are hard to find, farmers are in trouble, and racism won't seem to go away. Along comes President F.D.R., who promises a New Deal, gives Americans hope, and then sees the nation through the horrors and victories of World War II.