History of US # 8: An Age of Extremes 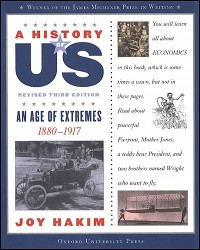 History of US # 8: An Age of Extremes

For the captains of industry (sometimes called Robber Barons)--men like Andrew Carnegie, John D. Rockefeller, J.P. Morgan, and Henry Ford--the Gilded Age is a time of big money. Technology booms with the new trains, telephones, electric lights, harvesters, vacuum cleaners, and more. But for millions of immigrant workers, it is a time of hardship––workers , including children, often toil 12 to 14 hours a day sometimes under dangerous conditions. In An Age of Extremes, you'll meet Mother Jones, Ida Tarbell, Big Bill Haywood, Sam Gompers,Theodore Roosevelt and others. You'll also watch the United States step onto the world stage as it enters the bloody battlefields of Europe in World War I.