History of US # 3: From Colonies to Country 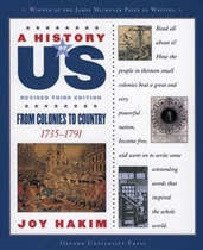 History of US # 3: From Colonies to Country

It really didn't make sense for a nation far across the ocean to control the fate of people living on the American continent. Many realized that, but Tom Paine put it into words. This book, perhaps the key book in the whole series, tells the story of the American Revolution. Lots of nations have had revolutions, but few have handled the rebuilding process as well. A group of "founders" realized that it wouldn't be easy for people to run their own government, so they designed a remarkable constitution. Nothing like it had ever been written before. Its ideas would change the whole world.