History of US # 2: Making Thirteen Colonies 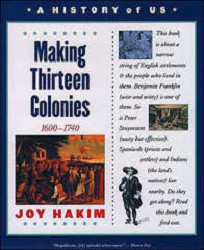 History of US # 2: Making Thirteen Colonies

The American continent, long isolated from the rest of the world, has been rediscovered. This time by Europeans. Some come in search of freedom, some come with the hope of riches. They sometimes bring Africans, in chains. As to the Native Americans, they face disease and competition from these newcomers. Read Making Thirteen Colonies to learn more. Meet Pocahontas and John Smith in Jamestown. Join William Penn and the Quakers of Pennsylvania. Sit with the judges at the Salem witch trials. Hike over the mountains with Daniel Boone. And read what Ben Franklin has to say in Poor Richard's Almanack. The dynamic interaction of all these diverse peoples will create a new kind of nation, one based on the idea that all people deserve equal treatment. Getting that fairness doctrine to work won't be easy