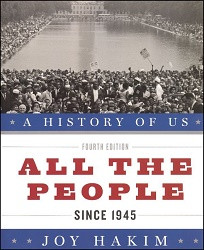 All the People, the last volume in the series, has been brought up to date with coverage of the election of Barack Obama, along with some thoughts on its significance. The book, a new fourth edition, has been completely redesigned with a bold contemporary look; Readers will encounter both famous and little-known Americans (Joe McCarthy, Martin Luther King, Jr., Barack Obama's mother), historical events (the Vietnam War, the first man on the moon, the wars in Iraq and Afghanistan), and major cultural movements (Civil Rights, 1960s counterculture, feminism). A chapter on the 21st century financial crisis explains the basics of investment banking. This is a book meant to provoke discussion and thought among readers of all ages.