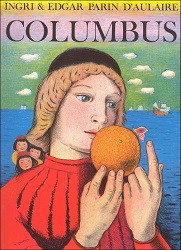 As is their custom, the d'Aulaires have thoroughly researched their subject in order to provide the most historically accurate account of the life of the man Samuel Eliot Morrison called "the greatest mariner that ever lived." In their pursuit, the d'Aulaires traveled to Spain, Portugal, and the Caribbean Islands to research original documents on the life of Columbus. Their text reflects many little- known facts not generally included in the typical biographies of Columbus. Readers will learn that it was the saga of Leif Erickson that was one of the inspirations for Columbus's voyage to the East. They will also learn that Columbus was such a skilled astronomer that he knew the exact date when the next eclipse of the moon was and used that knowledge to his advantage. They will also learn that though "Columbus was a great man, he was not a modest man. He wanted too much, and so he did not get enough" (54). This book is lavishly illustrated with the d'Aulaire's detailed lithographs in four colors.